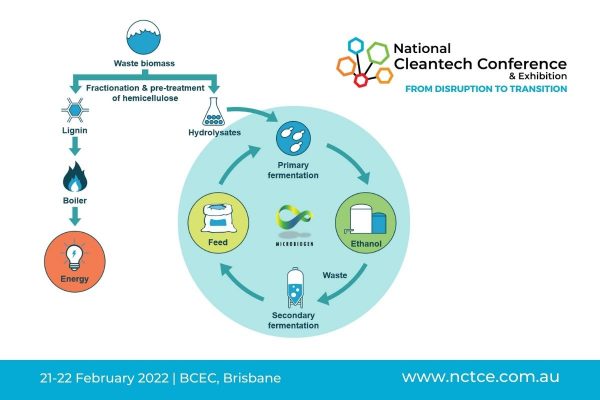 As the global combat against climate change continues, it is becoming increasingly evident that no single measure will be sufficient to overcome this widespread problem. All sustainability approaches at our disposal need to be deployed simultaneously if we want to mediate the negative effects of climate change. One such approach is to displace non-renewable fossil fuels with renewable fuels, e.g. bioethanol.

Until recently, two key challenges were associated with the sustainable production of bioethanol:

To address these issues, the Australian Renewable Energy Agency (ARENA) supported a Sydney-based industrial biotech company, MicroBioGen, by contributing half of A$8M in research funding over 3.5 years to optimise a solution for the efficient and sustainable production of bioethanol.

This project was successfully completed in April 2021. Key achievements include:

In his conference presentation, MicroBioGen CEO Geoff Bell will explain how this ARENA funded programme took the world’s best 2G biocatalyst and optimised it. Geoff will also discuss the project’s sustainability implications with respect to the future of biofuels and food security.

Leading MicroBioGen as CEO since 2006, Geoff has been instrumental in transforming the company from a small, pure research group into an international commercial success for bioethanol production – winning the Australian Export Award in 2019. He holds a Bachelor of Science from the University of Sydney, and a Bachelor of Economics and a Master of Applied Finance from Macquarie University. Geoff was a Senior Analyst at two high profile investment banks: Prudential-Bache Securities and BNP Paribas Equities. At BNP Paribas Equities, Geoff went on to become the Head of Global Mining, Head of Australian Research, and Head of Company Research for the Asia Pacific Region. Geoff was the top-rated analyst in his field for over a decade and he won several industry accolades. He also serves as the Australian leader for the IEA Task 42 programme; a position he has held since 2014.

The 2022 program will focus on the crucial role Cleantech will play in the economic recovery and achievement of a net-zero future. The two-day, multistream program will be delivered both in-person and live-streamed.

Hear from our speakers who will discuss innovative strategies and solutions for businesses to make the move to clean technology for a sustainability and long-term business growth.